Tony Labrusca is set to headline the Cinema One Originals entry Double Twisting Double Back this October. The actor will portray the role of a gymnast in the film. Tony admitted that he was completely stunned when the role was offered to him.

“Unexpected siya and when this role came to my lap I was actually shocked because I have a friend who told me he was auditioning for this role and when we talked about the role it's like a crazy story. And they convinced me what it is all about, which is gymnastics that I could relate to. Eventually I accepted the role and I am really happy about it,” he said in an interview with Cinemanews.

The actor attributed his good performance in the movie to his directors and co-stars. “I really stand by my word na your relationship with your director and co-actors is so crucial lalo na for somebody new [like me]. If you really work with a really good director and your co-actors could give something to you, it is so much easier to give back. So it is so hard to take credit when people say I am doing such a good job because it is really my director, my producer, and my co-actors who helped me along the way,” he said.

What does is his take away from Double Twisting Double Back?

“What I like about this movie is that it’s something that people can relate to depending on what angle you look at it. I know there are touches on sexual addiction but the bigger picture is that we all have that thing inside of us that we try to fight. But at the end of the day, for the most part, all of us are just trying to live our lives. We all wanna be good people but there are so many things that hold us back so how do you win in life? That’s something really good that you can take away from the movie,” he said. 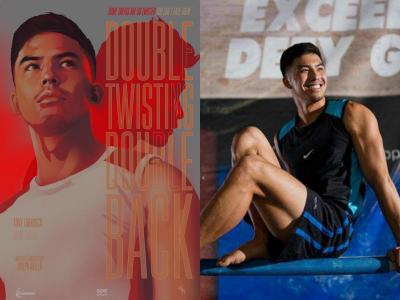